One of the most frequently asked questions by people buying weathervanes is: “Do weathervanes attract lightning?”, which typically leads to question number two: “How do I ‘ground’ my new weathervane?”

The answer to the first question is “No, weathervanes do not usually ‘attract lightning’ and actually less than a TV antenna does.” If you look around (or remember back a few years), you will see lots of houses with large skeletal TV antennas on them. Typically, these antennas are grounded but not part of a lightning protection system. This is not to conduct a a lightning strike to the ground. Rather, it is to dissipate the electrostatic buildup in the widespread antenna from wind and is especially true during a thunderstorm. If the charge is not dissipated, it will actually attract a strike and can send it through the buildings electrical system.   While no one can say for sure whether or not lightning will ‘hit’ a certain area, or item, one can estimate the ‘probability of a lightning strike’ with reasonable accuracy.

As for the second question, “How do I ‘ground’ my new weathervane?”, the answer is not as straightforward as one might think. The primary reason for “grounding” a weathervane is for lightning protection purposes. There are two ways to go. One, do nothing, and ignore the issue. See the comments on TV antennas above.

The second way to go is to consider the weathervane to be a lightning rod, and incorporate it as part of a lightning protection system. This involves, at a minimum, running two heavy cables (which are as big as your pinky finger) to two ten foot long ground rods, on opposite sides of the building along with using clamps, connectors, and other hardware designed for, and approved for lightning protection use.

The reality is, that if you are (or believe you may be) susceptible to lightning, it probably makes sense to have the complete lightning protection system professionally installed, and have your new weathervane incorporated into it.

Now for the strange part. If you choose to do neither of the above, but say, decide to ‘ground the weathervane’, by using a smaller gauge wire connected to only one round rod, THIS CAN BE MUCH WORSE THAN DOING NOTHING! Huh, you ask? If you have done the above, you have installed a grounding system that is not adequate for lightning protection. In this case, if a lightning strike does occur, your “half-way” system will most likely not have the capacity to drain off the lightning charge safely. instead, you will most likely wind up with some damage. It could be severe, such as fire, part or all of your structure destroyed or blown apart, etc, to minor things like blown electrical appliances such as TV’s, etc.

Hopefully you now understand why you need to do one of two things when it comes to grounding your weathervane: A) install a full lightning protection system, or B) do nothing at all.  B is the more common method used. 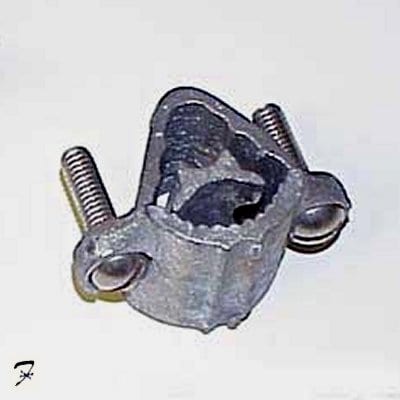 If you, or your contractor wish to learn more about lightning protection installation standards, one of the best sources is a publication from Underwriters Laboratory, titled: Installation Requirements for Lightning Protection.It is available directly from UL.