David Ferro is America’s premier weathervane designer. His finely crafted weathervanes are titled, dated, and signed one-of-a-kind copper sculptures with exceptional personality. There is a Ferro weather vane design in every state and in several other countries. A Ferro weathervane is a cherished investment whose merits grow with time and is destined to become a family heirloom..

The Artistry Is In My ‘Vanes’

In an unorthodox way, a humpback whale saved my soul. Not literally, mind you, but the whale did what wires couldn’t. Allow me to explain.

I had a very lucrative job in 1987 as a marine electrician. Most of my time was spent “behind a desk“, designing electrical systems. Being totally sequestered, I found myself longing for the daily interaction with people. I was becoming bored, frustrated and lifeless. I knew I had to get out, but how? When the opportunity presented itself to work as a salesman for a friend’s company, I grabbed it.  The phrase; when one door closes another opens, has never been more true.  Pegasus Enterprises made sheds and sold small weathervanes to top them off.   It was 1989, I was 24 years old, and little by little, these endearing animated sculptures sporting arrow and fin crept into my heart. I knew what I wanted to do for the rest of my life. I fell in love in weathervanes. 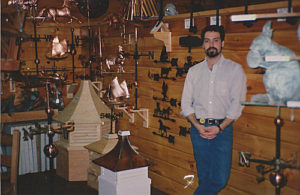 I leisurely began researching their story at libraries and historical societies. The more I learned, the more I wanted to know. What I couldn’t find in books, I found in the human element. I was fortunate enough to find experts and professional weathervane artists, from across the country, who were willing to talk to me and answer my questions. I also began attending art classes at the Rhode Island School of Design. My studies revealed a rich history, a proud craft, and a dying art. Amazingly, only about a dozen full-time weathervane sculptors still work in America.

Inspired by all that I had seen, I decided I wanted to try to make my first weathervane. The first piece I tried was a flat copper fish. I chose the design because I thought it would be easy. I failed miserably. Someone else had to finish it for me. He became my mentor and urged me to continue but it would be a year and a half before my hand touched those shears again. That’s how discouraged I was.

In 1990 I started my first weathervane company.  I was surrounded by my passion – weathervanes.  It was just about heaven except that in the back of my mind the copper and shears were beckoning for a rematch. 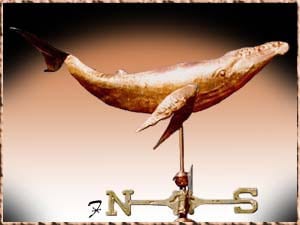 Painfully reminded of my first humiliating attempt to make a weathervane, I vowed my second attempt to utter secrecy. I worked late at night after everyone had gone home and hid the results during the day. After about a week, the figure of a humpback whale was complete, (The very one you see above). Reluctantly, I brought it into the light of day and began to show it. Everyone was genuinely  impressed and the work has been steady ever since. So you see, that humpback whale truly saved my soul by virtue of success, confidence and renewed dreams.

We did “everything”  there was to do with weathervanes at my first company and as it grew,  I found myself the chief of a successful corporation with several employees and all the bureaucracy and stress that went along with it. People strive to achieve exactly what I had but I eventually realized it wasn’t what I wanted. My daily management duties kept me “behind a desk” again. I was rarely sculpting weathervanes and that is what made me happy and fulfilled. I ended the corporation in 2004 to return to the bench, the copper and shears and started ‘Ferro Weathervanes’.  This time I have a much narrower focus.  Spend more time on the bench than at the desk! 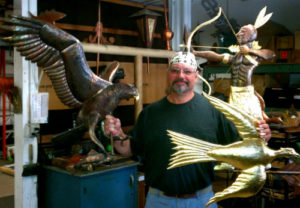 The winds of change have carried me into an entirely new life. Before, I always followed the crowd moving in the same inspired direction ($$$).  Now, for the first time in my life, I am free to be myself and set the course. People are looking to me for guidance, as I went to those who helped me years ago. Life is fun. It is unpredictable. Prospective owners commission me because I will make them a uniquely personalized vane and I find that process completely enjoyable. Bringing metal to life  seems so natural. Over the years I have developed my own style and I’m recognized for my ability to capture the spirit of the subject I sculpt. My weathervane designs fly above hundreds of rooftops across America and in at least a dozen foreign countries. Some of my copyrighted designs are being reproduced in quantity by the factories in Indonesia for the world markets.

My studio is nestled in the heart of New England.  Warren, Rhode Island is a charming seaside community with a rich heritage in boat building and handcrafts. I extend an open invitation to anyone who wishes to visit me here. 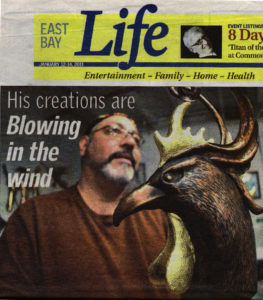 “From the beginning I’ve envisioned a weathervane built to combine solid traditional crafting with modern design themes and elements…….

From the beginning I’ve always envisioned a Ferro Weathervane.”

With more than two dozen years of weathervane making experience, David Ferro has amply demonstrated his commitment to observing the highest tradition of New England Craftsmanship while staying at the forefront of modern design.

Ferro Weathervanes are of a new generation; graceful, colorful,  and full of personality – yet, all his designs hold true to the fundamentals of his forefathers.

David’s own hands, using traditional techniques of forming and raising, create each weathervane sculpture. What makes a Ferro weathervane so exceptional is attention to personality. Features, which are essential to the character of a subject, are not ignored in a Ferro weathervane. “I will emboss facial features, musculature, and surface texture to capture a subjects essence.” David is a pioneer in introducing new materials to weathervane design. Many of his ideas are now followed by other weathervane artists. When appropriate, he utilizes hand fired and colored glass eyes created for taxidermists. Stained glass is also used when permanent color is desired. “I ally myself with a range of metal smiths and woodcarvers but it is my fascination of glass that inspires me lately. Herein lies another material that can withstand the elements. More importantly, it allows the introduction of color to a weathervane in a novel way. Future work will certainly incorporate more glass.  23 Karat gold leaf is used partially instead of as a whole to accent areas of a design permanently. Tinning parts of a subject also add a permanent highlight. Cast parts of his own design are occasionally used when more detail is necessary.   Only Ferro Weathervanes brings you flexibility, not only to the sculpture, but to the assembly below it as well. We have a large variety of posts, compass points, copper and glass globes, and other ideas to customize and personalize your weathervane. As you can see, David continues to be an innovator in his field with constant experimentation of new materials and effects.

The superior craftsmanship and attention to design at Ferro Weathervanes are unmatched by any other weathervane company.

Due to the fact that Ferro weathervanes are now collected as interior sculpture as well as rooftop ornamentation each Ferro weathervane is titled, signed and dated. Each of Ferro’s works stands to increase in value with age. In fact, David’s works will more than likely become heirlooms cherished by each following generation.

A COPPERS’ JOURNEY,  By David Ferro

A  copper body sitting on my bench for weeks.

No legs, no head, yet it calls to my conscious,

Give me form and find me a home,

For I desperately want to be part of this world.

Let me be, let me soar above it for a century,

and soak it in.

Then, let me down

and give me place of honor upon a mantle,

Inside where it’s warm and dry

So that I may retire.