The Most Expensive Weathervanes

The Most Expensive Weathervanes of All Time by David Ferro 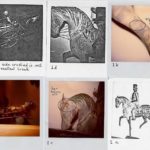 On January 27, 1990 A Boston Folk Art Dealer and collector by the name of Stephen Score paid $770,000.00 at Sotheby’s Auction of New York, for a rare and exceptionally beautiful molded copper Horse and Rider weathervane made by J. Howard & Co. of West Bridgewater Mass. around 1860. It is the highest price ever paid for a weathervane. The vane was part of the late Bernard M. Barenholtz collection.  Ferro’s associate, the late Marilyn Strauss conducted an inspection and repairs on the piece for Chubb insurance in Mr. Barenholtz’s behalf while he was still alive. The appraisal dated only two years before the auction valued the weathervane at $200,000.00 to $225,000.00. The minor damage on the weathervane was repaired for $362.16.

The auction catalog describes the Horse and Rider weathervane as follows. “…swell bodied and finely wrought and detailed figure of a straight-backed 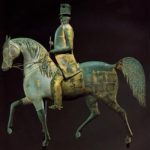 rider in top hat with flat brim and molded hat-band braid around the crown, wearing a long jacket with rows of repoussé buttons, holding a whip in one hand with individually twisted tails and finely wrought reins in the other, the rider seated on a smooth and beautifully proportioned ‘index’ horse with molded zinc forequarters and neck with incised and molded eye detail, sheet copper ears and cut and crinkled repoussé mane and feathered tail, the forelock of cut, twisted and gilded sheet copper, the raised lower front leg and back legs of molded sheet copper, the riders left leg in one remaining twisted copper stirrup with star spur, the left leg impressed with makers stamp, J. Howard & Co. Retains clearly visible squares of gilding, the other surfaces weathered to a fine all-over verdigris.” The estimated selling price was $400,000.00 – $600,000.00.

Exactly nine years and one month later on February 27, 1999, the same Mr. Score paid $222,500.00 to auctioneer James D. Julia, of Fairfield Maine for a 48″ long by 19″ tall weathervane of a team-horse drawn Fire wagon complete with 2 detailed firemen. It is the second highest price paid for a weathervane in history. The weathervane was Made by the 1875-1888 firm of Cushing & White / Waltham Mass. The weathervane which cost about $200 new, once stood atop a firehouse in Lowell Mass. and one can assume the weathervane was fully gilded. 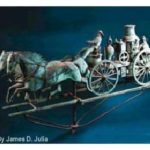 Julia’s auction catalog described the weathervane as follows. “The weathervane depicts two identical horses pulling a four-wheeled fire engine cart with driver and fireman on back. Fire wagon has large seated man with helmet, seat with lanterns on each side. Middle section shows two lanterns, also a large water tank with spigots and wheels. Man on back with full cloak and fire helmet. All affixed to a tubular undercarriage that is supported by four shaped wrought iron metal rods. Affixed to a central disk on shaft support rods. Wonderful original verdigris patina. Size: 48″L X19″ H without undercarriage, 28″ with undercarriage. To our knowledge this is only one of a few to currently exist with the double horse by Cushing & White.” The estimated selling price was $80,000.00 to $100,000.00. The Horse and Rider can be seen in an Antiques magazine advertisement for the Barenholtz auction in the December 1989 issue, and American Folk Sculpture, by Robert Bishop, p. 6. Photos of the Fire wagon are available in Antiques magazines June 1966 issue, page 821. Pictures can also be found in the following books; American Folk Sculpture, 1974, page265, and “A gallery of American weathervanes and whirligigs, 1981, page 99, both by the late Robert Bishop. A nearly identical weathervane is in the collection of the Henry Ford Museum & Greenfield Village in Dearborn, Michigan.

Weathervanes have been getting a lot of attention at auctions in the folk art category for the past several years. In January 2006 a figure of Liberty was sold in New York at Christie’s for a then record $1.08 million. In August 2006 a train weathervane went for 1.2 million at Northeast Auctions based in New Hampshire. Sounds like a chunk of change right? Well, not so fast.

Josephine and Walter Buhl Ford have been known for their very large collection of folk art and furniture. Josephine has been renowned for many generations for her collection. She was the third generation of her family to live with folk art. Automobile mogul, Henry Ford, Josephine’s grandfather, was one of the first weathervane collectors and was great at the bargaining table, generally getting them for a very inexpensive price. Edsel Ford, Josephine’s father was another avid collector.

Josephine had a home located in Grosse Pointe Farms, Michigan. On the roof of her home sat a magnificent 5’2? weathervane. This rare and elegant figure had a fringe skirt and a feather headdress. This was a monumentally tall, flaking copper weathervane of an Indian chief hoisting a bow. It was estimated that it may bring up to $150,000.00. This piece was auctioned on October 6, 2006 at Sotheby’s in New York for a whopping $5.84 million dollars. The buyer was Jerry Lauren, executive vice president of mens designs at Polo Ralph Lauren Corporation. This weathervane still holds the record for the most expensive one ever sold.